Rita and Neil MacDonald by Jan (Renouf) and daughter Sabra

Rita, the ‘baby’ of the family was the only one born in Australia.

Margaret Brown (Rita) was born in Quairading on 6th March 1911. Her family had a farm situated between Quairading and Tammin. She attended the local school and played hockey, and, as legend has it, she won the town’s “Best Ankles Contest”. Rita worked at the Quairading Co-op and around this time she met a young Bank Officer named Neil Ryan MacDonald.  Neil was transferred to Quairading with the Commercial Bank of Australia. They married in 1937 when Rita was 26. Shortly after, they expanded their family with the arrival of Neil Graeme (Graeme), William Barry (Barry), Jan, then Margaret Ann (Ann). Several years later the arrival of Ross Alexander completed the family. 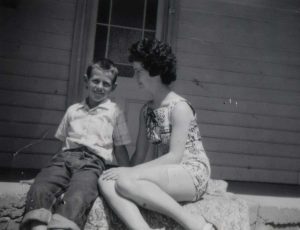 Neil’s job had them travelling around a bit. They moved to Marmion Street, East Fremantle for a short stint, Kellerberrin and several other towns before settling back in Quairading. The children attended the local school in Quairading where they would walk home at lunchtime to a home cooked meal prepared by Rita, then a homemaker, whilst Neil was the breadwinner working at the bank. Once Ross started school, Rita was asked back to work by her previous employer in the Co-op, where she eventually became a department manager. Times were tough and they both worked hard to support five young children. Rita’s mother, Nanna Brown, would often stay with them when she wasn’t staying with her other children. The children grew up in Quairading and attended dances and sporting events in surrounding towns. After time, they got married or moved away for their careers.

When Neil retired as a Bank Manager, he and Rita packed up and moved to 39 Elvira Street, Palmyra. Eventually Jan and her husband Barrie, and children Kylie, Sabra and Troy moved to Perth also. A fourth child, Brodie, arrived in 1968. Everyone would gather at the house in Palmyra on the weekends. Graeme would bring his family, with wife Barbara and children Elizabeth, Nicole and Ryan, down from Geraldton to stay with Rita and Neil and catch up with everyone. Ann lived a few streets away by now, and Barry stayed at the house on and off.  Ross would visit when on leave from the Army. 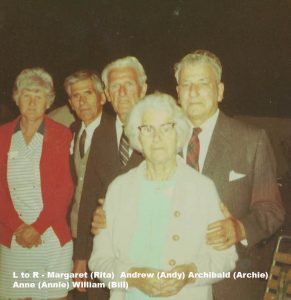 Photograph of Rita at approximately 23 years of age

A highlight of the time at the Elvira Street house was the annual Brown Family Christmas Party. These parties were legendary, and everyone enjoyed an abundance of food, alcohol and stories of the old days. There was usually a beguiling rendition of Danny Boy led by Uncle Bill late in the evening. Rita loved these times with family and entertaining was a talent of hers. Family or not, she made everyone feel welcome with her kind and caring nature.

MacDonald’s in Elvira St Palmyra in the late 70’s
“The bowler is me (Ross MacDonald), the guy smoking is my brother-in-law Barrie Renouf and alongside him is his wife/my sister Jan with my father Neil alongside her. Then there is Rita striding through in the light green dress followed by my brother Barry in the middle in the striped tee shirt and my sister Ann in the spotted red dress.  The young blonde is Sabra Renouf (Read) and the batsman is Troy Renouf “

Around the mid-70s, Rita and Neil moved a few streets away to a corner block in Petra Street.  It’s here where Ross introduced them to his new wife Jan, and they all enjoyed wonderful Christmases and many family gatherings together.

Neil worked hard all his life at his job in the bank and never missed a day unless he was in hospital. He played bowls and frequented the Buffalo Club in Fremantle but mostly led a quiet life.

Rita enjoyed her beloved South Fremantle Football Club, her ladies’ luncheons with all the girls in the extended Brown family, and her trips to Geraldton. She especially loved having all her family around including her children, her grandchildren and her great grandchildren. 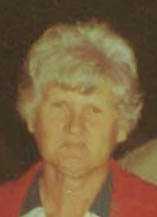